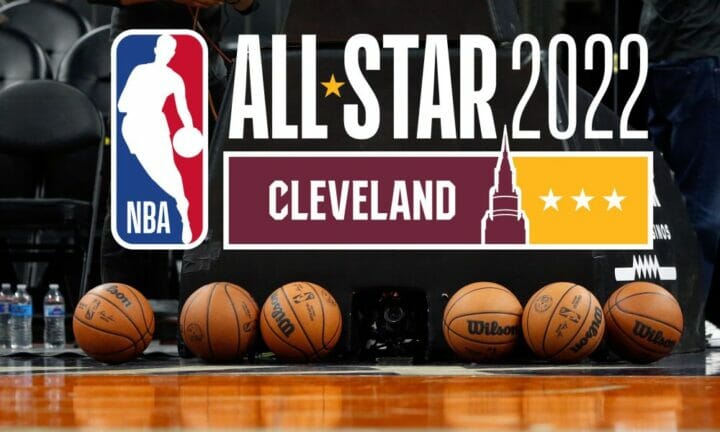 The brand of the 2022 NBA All Star Game basketballs

The different types of the 2022 NBA All Star Game basketballs

In this year’s all star game, there where used at least 4 different types of basketballs:

This ball is all brown, and it has the all star game logo on one side. It’s made 100% from leather and it has all the standard markings of a basketball:

Those balls were used in the “money” rack of the 3 point contest in the All Star game. Each shot made with these balls counted for 2 points, hence giving the contestants a chance to boost their score. It is mostly a brown and white ball with lots of detail on it. It also pays a tribute to the hosting city of Cleveland by including relevant designs and the word CLE22 on it

One special and very impressive ball of the 2022 NBA All Star game was the green MTN Dew Zone basketball used in the 3point contest. There where 2 spots on the arcs with one ball in each spot. The “MTN DEW Zone” shot is the most valuable shot in the game, with three points awarded for each shot made from it. Players who make these two shots score six bonus points.

This purple and white Wilson basketball have been used in the skills challenge. You may take a look at this ball in the below screenshot from the participation of the Antetokounmpo brothers in the challenge. The NBA Skills Challenge is a basketball skills contest that includes three events: passing, shooting, and ball-handling. This year, for the first time, it was not played solo, but in teams of 3 players.

The all star game is always a great event, and this year’s edition was no exception. The Wilson basketballs used in all of the contests and events associated with it were all of very high design and creative standards. We hope you enjoyed learning about them!

Now that all of the all star game excitement is over, it’s time to focus on the next big event: the NBA playoffs. We’ll be sure to keep you updated on all of the latest basketball news and developments, so stay tuned! Thanks for reading.

If you think we missed some types of the balls used in the 2022 all star game or would like to point out something else to us, please leave a comment!