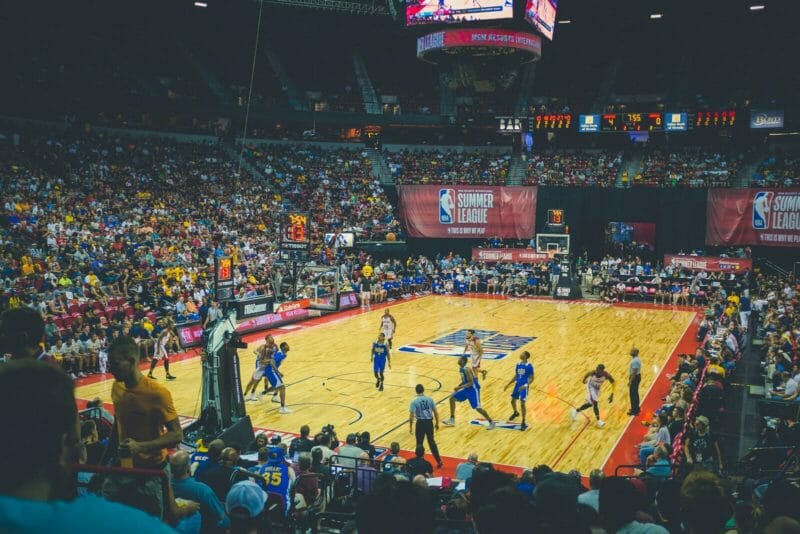 What are the official basketballs used in the NBA? What about other big competitions internationally, such as the Euroleague, the FIBA World Cup and the Olympics? And what is the size of an official ball? In this article, we will answer all of these questions!

The official NBA basketball in 2022

The official game ball of the National Basketball Association as of 2021 is the WILSON NBA Authentic Series Basketball. It replaced the Spalding Official NBA basketball that held the league’s crown for the previous 37 years. The WILSON ball is made of original leather and is being tested to meet the high standards set by the NBA. Wilson balls are also used in the WNBA and G-League.

The G-league official ball is very similar to that of the NBA, just with some logo adjustments to include G-league branding. The ball is made by Wilson as of 2021.

The official WNBA game ball is a Wilson Evo NXT of size 6. This ball is used in all women’s NBA matches.

The Molten BG5000 ball is the official game ball of all international competitions organized by FIBA (the International Basketball Federation). This includes major tournaments such as the FIBA World Cup of 2023 which is being held in the Philipines, Japan and Indonesia. Its cover material is premium leather while it features High Foamed Rubber and a foam backing layer accompanied by an original leather texture surface. Apart from being the official FIBA basketballs, the BG5000s are also the league’s official game balls in other major leagues of the global stage such as New Zealand’s league and also the Australian NBL’s.

The Wilson NCAA Official Game Basketball is the official ball of the National Collegiate Athletic Association. Here we need to clarify that this is only the official game ball of the final NCAA tournament, as at previous stages each team uses the game balls of their liking, according to the various sponsorships they hold with different basketball brands.

What basketball do they use in the Olympics?

The Olympics use the Molten BG5000 ball which is also the official game ball of all international competitions.

How much is an official basketball?

The WILSON NBA Authentic Series Basketballs costs around $60. Original basketballs of other competitions such as the FIBA World Cup can be much more expensive, for example, a Molten BG5000 can cost $250+ in a store or online.

What is the official basketball size?

The official ball size is a Size-Seven, also known as the 29.50″ ball (75cm) circumference. This is both for NBA and FIBA competitions. The women’s game uses a smaller-sized ball which is called Size Six or 28.

In this article, we have answered the question: what are the official basketballs used in the NBA and other big competitions internationally? What is the company making them? We have also looked at some of their specifications. As you can see, there is a great variety of brands and models being used in professional and amateur leagues all around the world! Which one is your favorite? Let us know in the comments below.